There is a specific goal about women,

Rural women and girls in Uganda still face huge challenges including, availability of jobs, not being included in the decision-making process, inability to negotiate individual rights in and outside the home as well as political discourse.

It is my view that some of these challenges persist due to social and economic exclusion of women, as well as political will that means resources are not set aside to address women’s issues.

An example of an issue that impacts women and girls that but is often neglected is menstrual hygiene.

After hearing and reading about rural girls missing several school days a year due lack of access to sanitary towels we decided to explore how this issue could be resolved.

It seemed to us that, if girls are missing school days, this implies poor school results or girls dropping out of the education system leading to inability to access formal employment and in turn high incidences of poverty amongst rural women and girls

Our approach was mostly practical. We provided fabric for making sanitary towels and sewing machines and a local woman started making up homemade sanitary towels for school age girls.

By the end of 6 months, 37 girls had received free homemade sanitary towels and we wanted to find out what impact if any the towels had on their lives 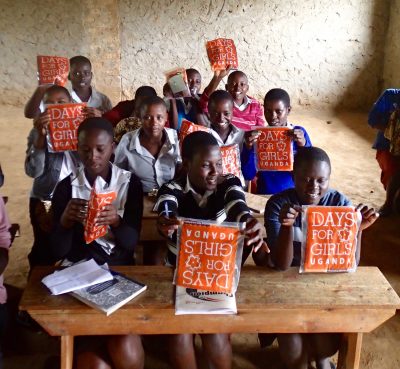 Alex, our colleague in Uganda sat down with some of the girls to find out how they got on with the homemade sanitary towels and here is their discussion

Impact of reusable pads on the welfare of girls in Ruhanga

The girls reported the following to have been the impact of reusable pads on their welfare and the welfare of the community.

One respondent had this to say.

“There was a time I missed a midterm test because I didn’t have sanitary pads. I live with my father and when I asked for money for sanitary towels. He told me, he had no money to waste on “useless” materials. I was afraid of being humiliated. I had recently witnessed the humiliation of a girl in my class due to an accidental leak that left a blood mark on her chair.  I didn’t have to face such humiliation because of free sanitary pads. As a result, I performed well last term having been able to attend all the lessons including the days I was in my periods. ”

This what one of the girls had to say;

We have been having problems with our latrines getting filled quickly (and sometimes having a funny smell) because some girls would dispose their used sanitary pads therein.[1]

Some girls reported that disposable sanitary towels left them with infections and this had improved as a result of using re usable sanitary pads. One respondent said;

The disposable towels did not always keep me dry. I used one towel a day as I didn’t have enough money to buy enough towels to enable me to change several times a day. As a result, I suffered infections.

Having access to reusable sanitary towels has meant, that I can change as often as I need to and this improved hygiene has meant I no longer have infections resulting from the over use of one towel. These towels have saved me money too.

The girls love the red colour of the sanitary pads and some reported that it has helped them the mood swings associated with monthly periods. One respondent had this to say;

I like bright colours as they build my confidence and personality. The red colour of the reusable towels lifts my mood and doesn’t show stains.

Challenges faced when using the re usable sanitary pads

The respondents cited the following challenges experienced in using the reusable sanitary towels made through Skills Development Initiative;

Following this feedback, Paige and I had a chance to meet some of the girls and their mothers in Ruhanga. Through our conversations, we learned that some women had no income for most part of the year and as such, have no access to disposable towels and have to improvise during that time of the month.

This means using old pieces of cloth as sanitary towels and for the girls 2 or 3 days off school.

When we explored the issue of cost and hygiene, it became apparent that both women and girls are prone to infections because they do not change soiled towels throughout the day.

We were unable to determine precisely whether this was due to the cost of the towels or general knowledge/understanding of menstrual hygiene but concluded that it was a combination of the two.

Whilst I appreciate that SDGs are merely a development framework, I worry that issues such as, menstrual hygiene that impact women in profound ways will continue to fall through the proverbial development crack if we don’t take action to address them.

You can support our journey by making a donation at

[1] From the Focus Group Discussion held on 3 July, 2015 at Ruhanga Skills Centre.

We are working to provide all people with access to the means for good health. Help poor people overcome emergencies.